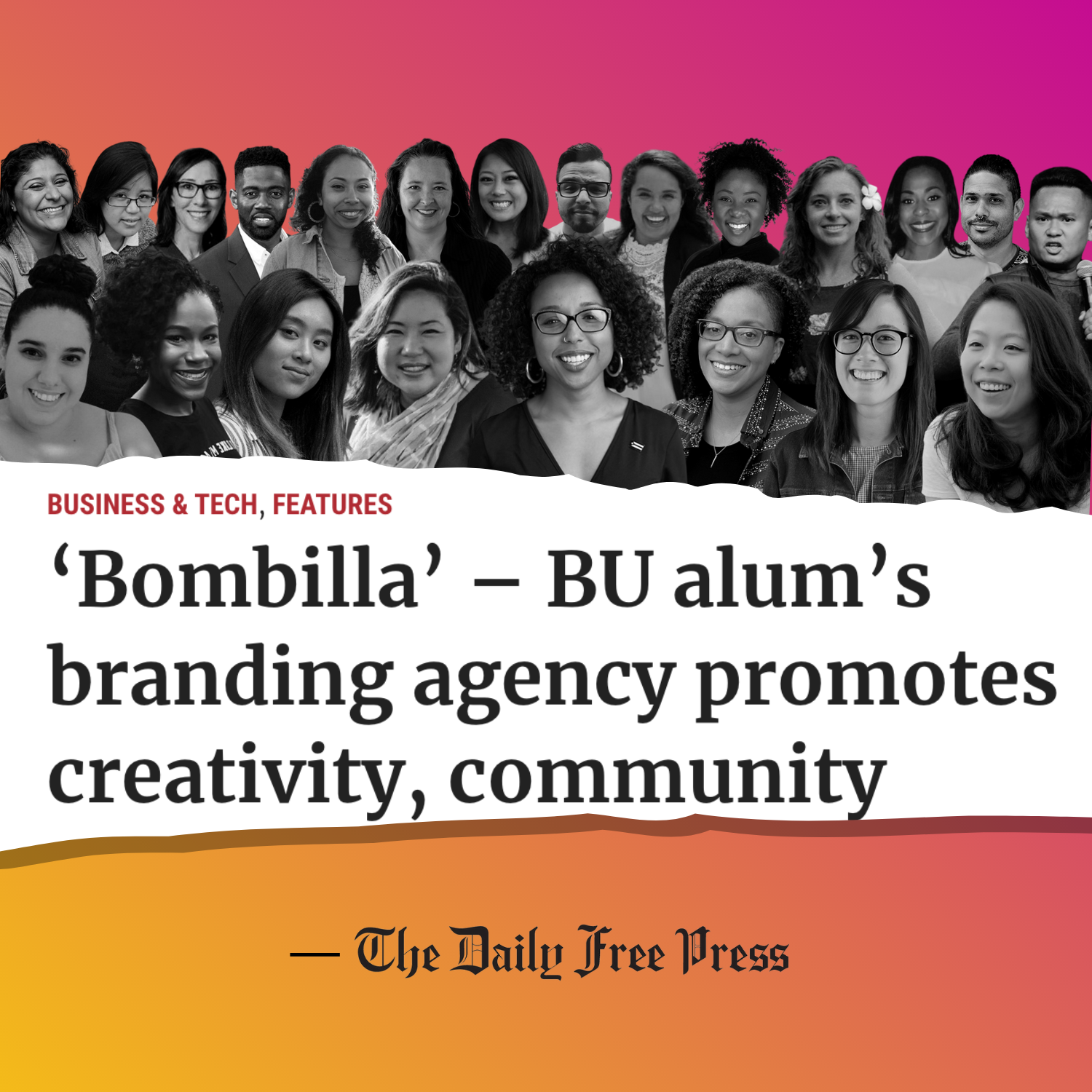 In this article, originally published in April 2022 by The Daily Free Press (Boston University), journalist Stella Tannenbaum interviews BU alum Ivellisse Morales on bombilla's branding agency origin story and members of team on the what it's like to work at bombilla:

Bombilla, which means “lightbulb” in Puerto Rican Spanish, also happens to be the name of a design and branding agency created by a 2012 Boston University College of Communication graduate. The name is a “nod” to CEO and founder Ivellisse Morales’ Puerto Rican heritage.

“It’s hard to say without a smile on your face,” Morales said. “It’s unique, it’s memorable, it’s easy to pronounce and it signals from the very beginning that we are different.”

Morales sought to create a mission-driven agency seeking social change. The company, which is run by a team of six women, focuses on graphic design, brand strategy and visual identity.

“Our clients are women, Black and brown, queer-owned small businesses, nonprofits, social enterprises, visionary individuals who are using their skills to make change,” Morales said. “And we’re supporting them with our own skills.”

Kimberly Cho, creative project manager and designer at Bombilla, said using her design skills for social good is an experience she does not take for granted.

It brings me a lot of purpose and light just because knowing that I’m able to apply my skill sets to work that really matters and benefits the world I live in is definitely something that I’m definitely grateful for.

In 2018, she set an exit plan for her corporate job and began her journey to create Bombilla.

“February 1 was my first official day working for myself,” she said.

From a business model that incorporates “creative human hours” — a concept based around working four to six hours a day — implementing “No-Meeting Mondays,” “Fitness Fridays” and two “Wellness Weeks” a year, Morales is creating a conducive work environment optimal for her crew of designers and brand gurus.

“It turned out to be one of the most damaging experiences for me as a human,” Threets said. “Especially a woman of color.”

Threets began searching for a company like Bombilla because she was “sick of being the only Black or brown person in the room” and wanted to use her design expertise to benefit the greater good.

She described Bombilla as a “secret pot of gold” providing all she could have hoped for in a company.

“It seems like the ungettable get, but it existed,” Threets said. “Bombilla is everything they say they are and more.”

Threets said it’s important for young women of color in the design industry not to “water down who you are.”

Don’t dim your light and don’t lose who you are. Everything will come full circle.

Cho said as a freelance designer she was often criticized for her design decisions, but that all changed when she joined Bombilla.

“I never got that from Ivi,” Cho said. “She was really understanding and very trusting of the design process that I had already established and laid out.”

Morales creates a culture of “camaraderie and connection” that makes the members feel comfortable bringing up their questions and concerns, Cho said.

“We don’t have to feel like we need to hide who we are at work,” Cho said. “We don’t have to code switch to be a certain way. We are able to work as a team, but I also feel like there’s definitely a huge level of trust and friendship that’s there that you might not always see at a corporate company.”

Morales is excited by the amount of BIPOC and queer creative agencies “filling in that gap” in the advertising industry.

We’re in a position where we’re able to be the storytellers and keep it authentic. We do bring a justice, equity and inclusion lens. So if we’re working with a predominantly white client, we’re staying honest about their language, their tone, their representation and imagery.

Check out the original article by Stella Tannenbaum on The Daily Free Press (Boston University).